On 19th June 1948, Barry Maurice William Hearn (sports promoter) was born and it changed the outlook on sporting events in the world. Barry Hearn (the chairman of Matchroom Sport) was born in Dagenham, Essex and had his education from Buckhurst Hill County High School. It was during that time he started washing cars, doing small other business and working as a vegetable seller. Then, this English guy became an accountant and around 1973, Hearn took the finance director’s role in a design company located in Kensal Green which was known as Deryck Healy Associations.

Second fish of the trip. Close to pb for this common just under 30 lb. pic.twitter.com/HIAS44RrBF

The dominant increase in Hearn’s net worth can clearly be seen in the following data recorded and given by Hearn’s company themselves. The remarkable changing and increase in money which are leading only upward is eminent here. 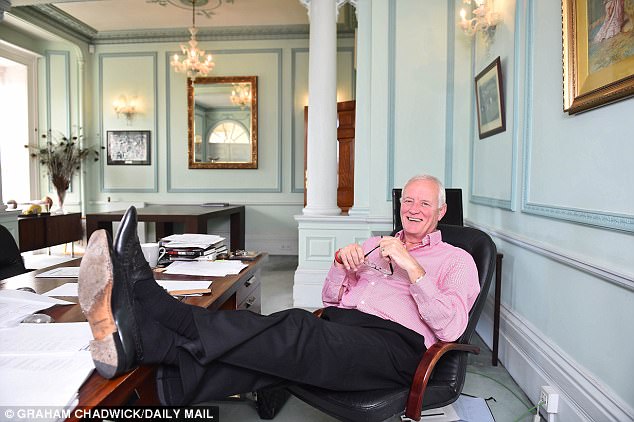 Essex Life Magazine reported that Barry Maurice William Hearn’s family net worth is an astounding 82 million pounds! His son Eddie Hearn (mentioned above) is worth 5million pounds. If we calculate Barry Hearn’s individual net worth, it turns out to be more than 65million pounds. This kind of high net worth is essentially an upshot of his perseverance in the past decades in business.

The company has well known and long-term clients which include Fox Sports, HBO and Sky Sports.

This company has been reported to be behind the great boxing fights between Anthony Joshua VS Joseph Parker in Cardiff back in May as well as Bellew VS Haye rematch in London in March.

Barry Hearn is known as a sports promoter, namely football, darts, table tennis, boxing as well as snooker. He is now 69 years old, handling his company with his son; Eddie Hearn. He bought Snooker hall in Romford, London in 1970, when BBC telecasted and promoted snooker on tv. Hearn quits Leyton Orient (Football club) as president in 2017 as EFL demands performance.

Barry Hearn is married to a woman named Susan, they both have two children together; Katie and Eddie Hearn. Eddie Hearn is also a sports promoter, he is a group managing director of Matchroom Sport, as well as a director of Professional Darts Cooperation.

Barry’s dad was a bus driver and his mother was a cleaner. Hearn had to work really hard to qualify himself as an accountant. His outstanding boldness with eloquence and persuasiveness helped him to develop a firm called Kensai House Investments.

In the early 1990s, he nearly went bankrupt and had a heart attack in 2002 but returned to be a multi-millionaire.

The strange thing is, there is no much information available related to Sussan hearn, the wife of Barry Hearn. She try reach her for our blog post, but we could not.

What is the actual job of Barry Hearn?

A very common question that arises in our mind when we learn about Barry Hearn’s net worth is, what is his actual job? How did he get this famous? Stay connected to the coming lines and you will learn all about his company and his ups.

Matchroom Sport is a promotions company and Barry Hearn is a founder and chairman of this company. This company has basically set together and formed a bunch of matches in a variety of sports for many several years, it’s a multi-million-dollar company.

Table tennis, pool, bowling, golf, and boxing are included in the sports that his company supports.

“Matchroom” is his own company where he has put about a third of his money to invest in it.

Hearn has also been a manager of Steve Davis; a retired English professional snooker player from London. He won the 6-time championship.

This later in 1987 turned his interests not just in snooker but boxing world. His famous promotions include the fight between Joe Bugner and Frank Bruno the same year.

A lot of people recognize Hearn’s interest and achievements in the boxing world’s contribution to growing the boxing sport.

One big achievement of Barry Hearn:

He revived the spirits of the sport ‘boxing’ by his great amount of contribution not just in the form of money but putting his mind and effort into it.

Prizefighter is a boxing series created by Barry Hearn; his biggest achievement. These series include eight fighters initially, they compete in 4 quarter-finals of 3 x 3-minute rounds. This later leads to two semifinals and one final, all happening in one night. The total prize money for the tournament is 80,000 pounds. The winner gets to take home 32,000 pounds.

This professional boxing tournament’s credits go to the boxing promoter Barry Hearn, himself and this is aired on Sky Sports.

Other Celebrities net worth